skip to main | skip to sidebar

Scoring scoresheets for iphone have been around for a while, but nothing open source until May 2010 when 6-4-3 Baseball Scorecard for Android came out. This has probably lead the standard in pad scoring ScorePad to release this evaluation version (ScorePAD V8) of their proprietary software. I've set it up with lineups for today's Toronto Blue Jays at Colorado Rockies - Game 2 (Scored Live tonight at the ISCB, 8:10PM EDT 6:10 PM MDT). I loaded in yesterdays lineup with today's probable pitchers - it may change.

The ScorePad has all the buttons I imagined when I began building my DIY Score Card.

You high-light the batter who's at the plate and then, if they hit the ball for a single, you go to the batter row to the right of the lineup section that has a selection scroll beneath it, click '1B', a green angled area appears in the AB box along where the first base line would be - indicating Fred Lewis is on first base. 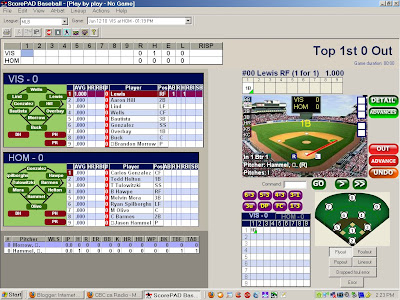 There's no way for me to share this live with you in internet land, except by taking a 'print screen' shot of it with my Windows OS - like I've done here.

This Blog has Moved

Click to go to the Internet Baseball Score Card Blog.

The Baseball Bloggers Alliance is a "SABR Chartered Community"

This work is licensed under a Creative Commons Attribution-Noncommercial-Share Alike 2.5 License.